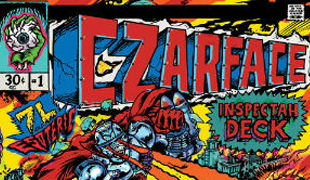 Independent hip hop veterans from Boston, 7L and Esoteric, have created an alternate universe of throwback rap by collaborating with Wu-Tang Clan alumni Inspectah Deck for the album CZARFACE. The combination proved fruitful for 90s boom bap beats and hardcore lyrics, both from the core group and guest features from Oh No, Vinnie Paz (Jedi Mind Tricks), Ghostface Killah, and Cappadonna.

The album theme serves as a superhero soundtrack for the anti-hero, dedicated to hip hop purists who are disgusted with current radio trends and mainstream popularity. 14 tracks deep, CZARFACE is a dedication to the artists who came before them, both production and rhyme-wise. Collaborations with Roc Marciano, Action Bronson, and Mr. Muthafuckin’ eXquire strive for creative and entertaining hip hop music while carrying a torch for the sample-heavy production of the past.

There are many stand out songs on CZARFACE that showcase the crew’s potent energy, such as “Czar Rafaeli”, “It’s Raw”, “Savagely Attack”, “Rock Beast”, and “Cement 3’s”. The well-placed features maintain a hype throughout the album. This project proves 7L, Esoteric, and Deck have been plotting their quality return with friends to help shine a light on the east coast heavyweights of now and then. Purchase CZARFACE here.