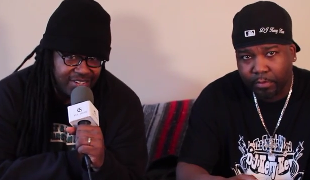 Emskee hosts a very special interview on TheBeeShine with DJ Kevy Kev. In this video, Kev goes into depth about his early memories of first hearing Hip Hop through Grandmaster Flash at a park jam. He was later introduced to his idol Marley Marl through a mutual friend and the two became close friends in the late 1980s. Kev talks about the opportunities he had in 1988 to spin for Mr. Magic on the famous WBLS show “Rap Attack with Mr. Magic” only to find out later that Mr. Magic was a big fan of Kev from The DNA Hank Love Show on WNWK. Around that time, Kev also met DJ Clark Kent and Pete Rock at WBLS. Eventually, Marley Marl got his own show “In Control with Marley Marl” on WBLS with both DJ Kevy Kev and Pete Rock. Check it out!