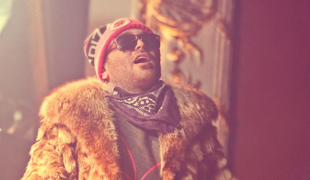 Lush One is an emcee and visionary from Los Angeles, CA. As a staple in the west coast battle scene for years, he is also a member of the group Rollin’ Rockers with partner Plex Rock. Formerly in the group Delinquent Monastery, Lush has released several independent projects including Streets Of Rage and his debut solo album, Music For Dope Runs, produced by Phillip Drummond. Lush also gained notoriety by competing in JumpOff’s World Rap Championship in 2007 with Oakland emcee F.L.O. and was featured in the Fresh Coast Battle Documentary in 2008. He was featured on Volumes 1 and 2 of the Non Perishables albums. The Rollin’ Rockers signed with Chinese Man Records in France and recorded an EP, BangBang! In 2011, Lush released a solo album, Gold Bricks In The Wall.