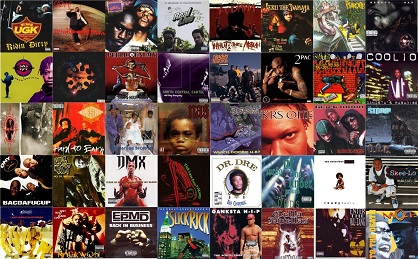 I remember my teenage years in the mid-90s being fascinated by rap music. I couldn’t relate to much of the content due to my suburban upbringing, but the artists’ pure, raw expression allowed me to be a part of something bigger than myself and my peers. At night I would listen to Philly 103.9 and record song after song onto a cassette tape until both sides were full. I asked my classmate the name of a song recorded on my tape, and he told me “Guess Who’s Back” by Rakim. It was the best song I had ever heard at the time, and intrigued me to dig up Rakim’s history with Eric B. My mother despised rap music. It could have been the most intellectual, inspiring song in the world playing, but as soon as any mild profanity was heard, she raised her voice for me to turn off that “trash”. My father understood the cultural impact from 2Pac and Biggie at the time. I would play him songs of different extremes; from the most obscure Anticon songs to the most offensive Eminem songs to Sage Francis’ song “Inherited Scars”, describing his frustration with his sister who expressed her suppressed inner demons by tattooing her body. I still remember the joy of walking into a record store knowing I would buy and enjoy the music without hearing it first. In 2013, I’m sitting at my computer with 130GB of rap music on my hard drive, wondering what happened to that feeling of excitement.

We all know that music has changed drastically over the years and will continue to do so. My taste in rap music has always included a wide variety of artists, such as The Wu-Tang Clan, Paul Barman, Immortal Technique, Mountain Brothers, Non Phixion, Louis Logic, J-Zone, Blackalicious, Eternia, OutKast, Deep Puddle Dynamics, and many more. It’s few and far between to find an artist in the past five years whose album I can listen to on repeat like I did with It’s Dark & Hell Is Hot by DMX or Moment Of Truth by Gang Starr. I was captivated by tongue-twisting lyrics and complex schemes from artists such as Big Punisher just as much as simplistic rhymes and flows by artists such as Timbaland. The Internet has eliminated the element of surprise, and technology has allowed for a tsunami of new songs from around the world to be recorded and released every week, but I don’t blame that for my apathetic state. Of course those factors play a role in society deeming music disposable, in addition to major record labels “dumbing down” the messaging. Some would even argue that rap music is now used as a tool for population control and has helped glorify recklessness in order to maintain a 90% occupancy rate for private prisons owned by major media corporations to profit. Money-making has been a part of hip hop since it’s inception in the 70s, and was documented as early as 1983 with Busy Bee in the classic film Wild Style. Puff Daddy was always braggadocios about his money-hungry habits, but has made some of the most timeless rap songs in history.

Music affects our moods and we can learn a lot about our emotional selves through our musical tastes. Listening to abrasive stories about struggle and pain from gangsta rappers when I was a teenager was a shock to my senses. It exposed me to a world that made me more curious the more I learned. The production value and lyricism from the early 90s throughout the mid-2000s defined various sounds of creative expression that moved me in some form or another. Rap music today does not resonate with me the same way, if at all, largely due to artists’ lack of individualism and messaging. Although I do not feel the same passion to venture to record stores and buy new releases that I used to feel strongly about as a teen, the raw, brashness of 90s rap music connected with me and I haven’t stopped listening to it since.