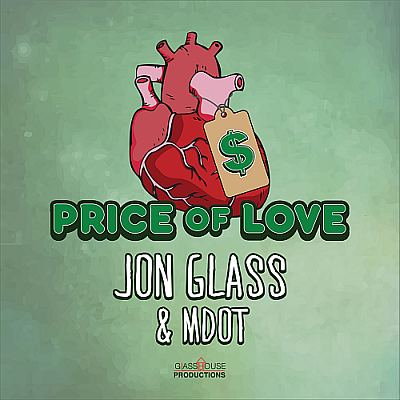 Jon Glass is finishing the last few U.S. dates doing the music for Token’s first headlining tour while M-Dot also recently returned home from his own month long (Oct.) European Tour! The two have collaborated consistently in the past generating buzz while working on M-Dot’s “Ego & the Enemy” album “Foreign” | “Give It To Me” | “Meow Mix,” one of the most heralded Underground Hip Hop albums of ’17.

Today Glass let’s loose another single for his weekly release series, “Price of Love” ft. M-Dot. We are 21 weeks in and Glass has been dropping constant fire featuring some of your favorite MCs: Skyzoo, Rapper Big Pooh, Reks, Ruste Juxx and more! M-Dot attacks Glass’ jazzy soundscape with brutal honesty about the struggles of being an artist on the rise striving for respect and validation from fans/peers. It can lead you down a dark road if you don’t have the resourcefulness and thick skin needed to survive in this industry. Brought to you by Five Se7en Music and Soulspazm.